Uppena: Uppena to be released on NetFlix‌ .. The most expensive mega hero movie.. 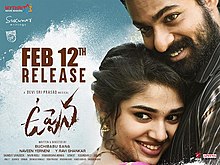 Entertainment (Nazstory): Uppena to be released on NetFlix‌ ..a huge priced mega hero movie. With the lockdown due to the Corona epidemic, all the film shootings have come to a halt.

It is known that the theaters have also been close. However, with the recent relaxation of the lockdown, the shootings have started.

On the other hand, movie theaters are also opened. Even after the lockdown was removed, the situation of people coming to the cinema theaters and watching movies did not look big.

However, if a film is not released on time, it will face serious losses. With this, the filmmakers are seriously thinking about how to get out of this situation.

At the same time, OTT platforms are booming. Due to this corona, the number of subscribers to OTT companies is increasing massively. Besides, it is getting a huge viewership.

If these companies also think that a film will be well received, the producer will come up with a good offer.

As a part of it, it is known that many movies in Telugu are currently coming into OTT.

Meanwhile, the upcoming silent films starring Nani V and Anushka’s Silent acted in the lead roles have been released on OTT and it seems to be okay.

Recently, another movie in Telugu is going to be released in OTT. Vaishnav Tej, younger brother of mega hero Sai  dharam Tej, will be introduced as the hero in the movie ‘Uppena‘ which will also be released digitally.

The film is directed by Buchibabu under Sukumar Writings and yet to be released. But did not see the theatrical release due to the lockdown.

Maitri Movie Makers and Sukumar Writings jointly produced Uppena. While the film produce with a budget of around Rs 18 crore, and it seems that OTT has given same offer.

It was in this context that the producers signed a film with Netflix. An announcement was also made in this regard. The film stars Kriti Shetty as the heroine and Tamil superstar Vijay Sethupathi in the lead role.